Even a Monster Can Be Moved!

This past week I spent a lot of time playing with social media and enjoying the stimulation that it can provide (not THAT kind!) and a few things art-centric popped up that I want to share with you.

While I was driving and listening to CBC they played Chopin’s Nocturne in C sharp minor, which I adore. But what moved me even more was the story the host shared with us about of Natalia Karp. Natalia, on her first night in a concentration camp, was ordered to play for the Commandant, Amon Goeth, in honour of his birthday. Her playing so moved the monster that he declared: “Sie soll leben!” (She shall live). Brave beyond all reason she insisted that he also save her sister and he did. Later they even managed to survive Auschwitz. Natalia passed on July 9, 2007 at the age of 96. You can read more about her in this article from Always On Watch blog.

The second was a Facebook posting by Women for Women, an org. I donate to every month. It was about a Pakistan cop, Mehmood Ahmed, who has taken up the brush to draw (pun intended) attention to the rampant violence against women he sees everyday and can do so little to stop. What he sees he paints on canvases outside the police station to draw public attention to this crisis. It is also a form of therapy for him since the psychological impact of seeing these horrific scenes day after day and feeling impotent would be extreme. 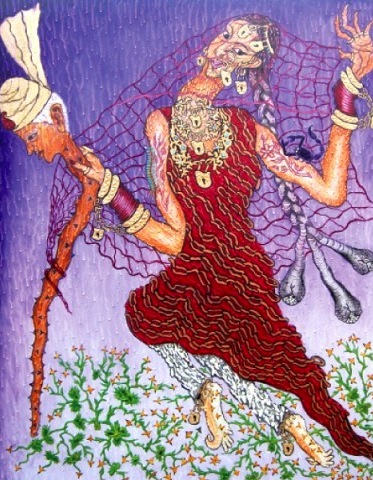 These are but a couple of examples of how art can heal and save, there are so many more. Please never doubt that what it can do for individuals, it can do for nations and our world. So please support art programs in schools and in your community, the payoffs are enormous!

Do you have any stories of art making positive impacts on people and communities? Please go to the comment box and have at it, I’d love to hear about them.

This entry was posted on September 12, 2012 by db designs. It was filed under inspirations and was tagged with art, art heals, cbc, chopin, Chopin's Nocturne in C sharp minor, concentration camps, Mehmood Ahmed, natalia karp, pakistan, violence against women.