It’s as if I just looked down for a minute & WAM! Two months have passed since my last posting… I have been so focused on clay, mostly working towards making some cool stuff for our annual winter sale (Nov.19th & 20th).

I also finished the latest Phoenix called Motherhood. Some pieces end up far from those first images that flash in my head and yet are exactly what they are supposed to be. Others, rarely, come out of the kiln a physical manifestation of those first visions. Motherhood is the latter. When she came out of the kiln I had to catch my breath it was so eerie, like the clay & glaze had a direct link to my mind without the usual noise & clutter, not to mention the foibles of air pressure, time & kiln moods.

Please understand that this is my concept of Motherhood and since I am without child it will be from that perspective. She has such an intense vulnerability and yet, with her heart nestled between her breasts, intensely protective and nurturing.

Public ( & not so public) VanCity Art 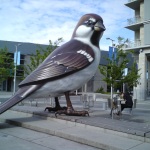 When the rabble babble on about “no fun city” or us not being a “world class” city I get twisted cause it usually comes from someone who thinks they should be able to either drink liquor 24 hours a day, anywhere they want or sell it 24 hours a day, anywhere they want. Then there is the group that thinks that the only good public art would be WalmArt. Yeah I’m sure you can guess how I feel about THEM! ugh.

I believe the best sign a city is fun and world class is the amount of public art that is available to it’s citizens & visitors and that includes gorilla type spontaneous creative combustion art. The dialogue that it can produce is stimulating and watching people as they see it and their minds start moving instead of their thumbs, what a rush! So I collect VanCity public art and I thought I would start sharing it during those times where my work is not being particularly wordpress-worthy.

Today I was cycling around the south False Creek sea wall, which is developing into quite a nice little neighbourhood I must say. Very cool sunbathing beds that look like sculptures, native plantings & lots of room for peds & wheelies. This is the area that the world got to see as the Athlete Village during the Olympics and we see it as a money pit. Whatever, at least it is a very cool money pit that the well to do will be able to enjoy. Us too of course.

This next one is just so awesome on so many different levels. It was made from recycled Olympic Games materials, mostly 1,000 wheat board panels.

“Exposed to weather, soil, and the passing of time, the wheat board construction will give way to a process of gradual decomposition, its form providing fodder for new growth. Transitioning slowly from sculpture to plant nursery, the project’s bounty will be offered for transplanting throughout the future development.”       Art Base 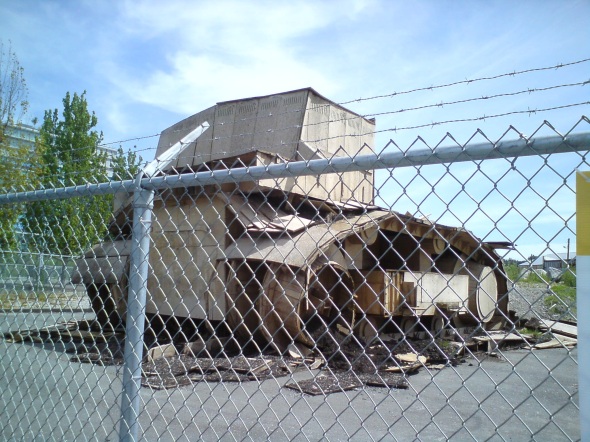